There's a fine line between madness and eccentricity. But for the name and connection to the Kennedy dynasty, Edith Ewing Bouvier Beale and her daughter, Edith Bouvier Beale ["Little Edie"] - would be considered mad. But thanks to their social standing -  Jaqueline Bouvier [Kennedy] is Little Edie's cousin - the mother/daughter duo have been elevated to the status of reclusive eccentrics.

But is there really a difference? In this case, eccentricity was simply madness with lots of money attached.

The Bouvier story is well known, and Grey Gardens among the most iconic homes in America. First splashed across the tabloids, and later captured in the documentary film Grey Gardens this story is so renowned you'd be hard pressed to find anyone who hadn't at least heard about it.

But I came to RTP's production of Grey Gardens: The Musical knowing very little. I was a child in Germany in the early 1970s and the scandal somehow escaped my attention. From what little I did know, I wondered how in the world this story could be a musical.

In fact, Grey Gardens works exceptionally well as a musical. Edith Bouvier Beale considered herself a singing virtuoso, and she and Edie's shared language was songs they'd sing around the piano as they imagined fame and fortune. But as if often the case in dysfunctional families, a shared language brings a complex tension between joy and despair. Music is their common language: and it both binds and strangles them.

As the musical opens, Little Edie (Gray Garrett) is anticipating her engagement party. She is set to marry *the* Joseph Patrick Kennedy, Jr. (Elijah Williams) and is on cloud nine. But her mother Edith (Susan Sanford) and Edith's paid companion George Gould Strong (Eddie Webster) have hijacked the party and are planning a concert to showcase Edith's talent. Edie is dismayed to learn of the concert - she wants her engagement party to be her moment in the spotlight. But Edith is incapable of letting anyone else shine, and even purposefully sabotages the engagement. Joe learns from Edith that his fiancé has a somewhat scandalous past - an unfortunate and very public wardrobe malfunction - which has earned her the nickname "Body Beautiful Beale" - and runs. Just like earlier suitors who caught glimpses of the madness and fled.

In Act Two, Susan Sanford returns playing Edie in her later years, as she's resigned to living in the prison of Grey Gardens, unable to leave her elderly mother (Boomie Pedersen). Their home has become a hoarder's nightmare with dozens of cats and trash everywhere. We see their true descent into madness. Edie puts on shows in outrageous costumes - singing "The Revolutionary Costume for Today" and imagining the life she always wanted but could never grasp. 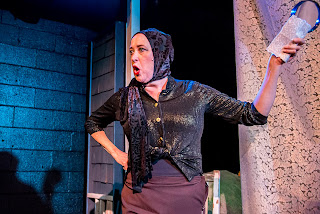 And Edith, confined mainly to her bed, takes odd joy in boiling corn for the local young handyman, Jerry (Elijah Williams) as she croons "Jerry Likes My Corn."

The cast of RTP's Grey Gardens is extraordinary, particularly Susan Sanford in Act Two as the older Edie. Her talent is jaw-dropping, and the rest of the cast is well up to the task of creating exceptional theatre.

With expert musical direction by Kim Fox and inspired direction and choreography by Debra Clinton, Grey Gardens is not to be missed.

This is not the kind of musical that will have you humming as you leave the theatre, but it is unforgettable nonetheless.

Due to popular demand, the show has been extended through July 27, 2019. For tickets click here.