But Can He Write? It's Local and It's Personal

It was a thrill to be part of the world premier of Chandler Hubbard's play, Animal Control. Firehouse Theatre's artistic director Joel Bassin took pains to convey to the opening night audience just what a momentous occasion it was. But those of us who "knew Hubbard when" didn't need the reminder. There was a clear electricity in the air.

We knew Hubbard could act. I became a fan watching him in The Altruists in 2015. But could he write? We were about to find out.

The answer is a resounding yes. Hubbard's script is tight, gut-wrenching, funny, and well-paced. But a strong script isn't worth much without strong direction and performances. Did Firehouse Theatre's production of Animal Control make the great?

Congratulations to director Joel Bassin and the superb ensemble cast. Hubbard was beaming after the show. Rightly so.

Kim Hawkins (Donna Marie Miller) is an overworked and under appreciated animal control officer who has to make life and death decisions in the overcrowded Carson County Pound. The weight of her decisions was conveyed with Miller's exceptional dramatic timing, as well as the unspoken body language which clearly demonstrated Deputy Hawkins' distress. It is easy to feel sympathy for Ms. Hawkins while at the same time loathing the authority she has to determine the fate of the "guests" at the kill shelter.

And we have sympathy and antipathy towards the rest of the characters as well. Marc Hanson (Adam Turck) sets this tragedy in motion by reporting a minor incident in which Dan Stanley's (Arik Cullen) pit bull bites Hanson's dog causing lacerations to the dog, and moral outrage to its owner.

Seeking justice and renumeration, Hanson's report leads to an inevitable encounter between the two dog owners as well as Stanley's neighbor, Patty Smith (Lucretia Marie Anderson), a single mom who has had run-ins with the pit bull as well. We understand Smith's desire to protect her kids, but react to her meddlesome tactics to punish Stanley for his dog's behavior.

Stanley's barely contained rage is palpable. We'd like to dislike him for not controlling his menace of a dog, but come to appreciate his love and devotion to the dog who started life as a bait dog. 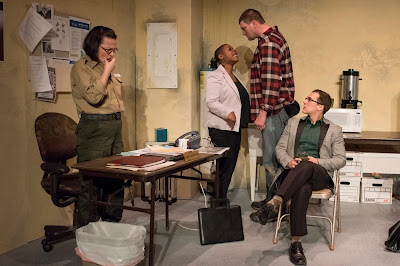 Wouldn't we all make a report if our own dog had been attacked ? It's easy to start out sympathizing with Hanson, but his moral outrage grows tiresome, as we realize the issue isn't entirely black and white or good vs. evil.

Animal Control is a tragedy. We know it won't end well for anyone involved. But Hubbard draws out the tension throughout, and the inevitable ending is not necessarily the one we were expecting.

Not only is Animal Control local, it is personal as well. The play drew on Hubbard's experience when his own dog was attacked by another dog. The play was personal for me as well. Last November I was walking my dog Max when an unleashed pit attacked us. I have the physical scars to remind me. But the emotional scars linger even longer.

This excellent play, and strong production will linger with me as well.