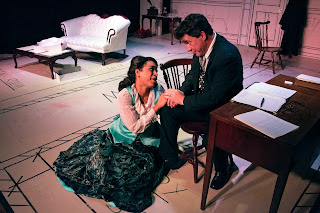 Fun for the Whole Family


Looking for a fun, theatrical event that's fit for the whole family?  The Whistle Stop Theatre's production of The Little Match Girl is well worth the trip to the Hanover Arts and Activity Center in Ashland, VA.

Director and Playwright Louise Ricks brings to life Hans Christian Anderson's classic fairytale in a way that retains its darker, moralistic tone while still being a delight for younger children.

The story is familiar - a poor young girl supports her family by selling matches. Sales are slow and the Little Match Girl and Gerda, her cat and only companion, are cold. The townsfolk ignore and avoid her as they go about their daily lives. Unable to sell a single match, she chances her father's punishment and three times lights a match. As the fire warms her and she drifts to sleep, her hopes and dreams come to her in visions. Upon lighting the last match, she envisions her beloved Babushka. Falling into a permanent sleep, she and Babushka are forever reunited. The townspeople, finding the Little Match Girl frozen with a smile on her face, belatedly find compassion for the girl.

Ziona Tucker is sweet and compelling as the titular character. And her sidekick Gerda the Cat played by Caroline Beals is perfectly charming. Beals' furrowed brows and cat-like hand gestures are delightful. I giggled every time she meowed. 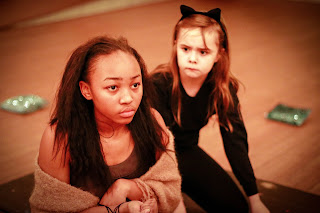 The familiar story is bitter sweet. However, while the theme of death is clear to adults and more mature children, the younger ones won't pick up on it. There is plenty of on-stage action that is whimsical and perfect for younger children. The little boy sitting in front of me squealed in delight each time Annie Zanetti appeared. Zanetti is as terrific physical actress, and she brought her characters, particularly Babushka- to life with zany facial expressions and creatively choreographed movement.

Each adult cast member plays several characters. Shalandis Wheeler Smith portrayal of an elderly townsperson made kids and adults laugh out loud. Marcos Martinez, Walter Riddle and Justin Sisk round out the adult actors, and all provide strong, enthusiastic performances appropriate for the audience.

Prudence Reynolds (CHILD) has so much sass and poise, and a commanding presence. 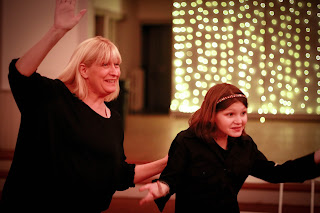 The audience sits in the round as the action takes place all around. There are few props; the cold wind and lit flames are portrayed by the actors through voice and whimsical choreography. Some of the story's finer points are told through facial expression alone, and each cast member uses those expressions to great effect.

Seeing The Little Match Girl was a charming way to spend a rainy Saturday evening.