For how many of us is the act of stepping outside to the mailbox an act of courage?

I sometimes walk down to our front gate in my pajamas and hope the neighbors don't see me. But that is an act of privilege not bravery.

I had the honor and privilege to attend Richmond Triangle Players' production of Trans Scripts, Part 1: The Women and even serve as a guest moderator for the talkback following the performance. I was nervous, sure, but brave . . . not really.

Playwright Paul Lucas spent five years conducting interviews with trans women and men. His interviews have been edited into this beautiful play which won several awards at the 2015 Edinburgh Fringe Festival. Lucas is currently working on transforming his interviews with the men into Trans Scripts, Part II: The Men.

Kudos to Richmond Triangle Players for producing this important piece of theatrical activism. Those of us in the audience are better for it. Provocative and moving, the play was also a call to action to put our "Ally" buttons where our mouth is.

I was struck by the diversity of the audience. There were more people of color and colors of our rainbow represented than any show I can remember. 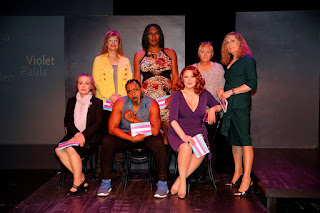 It is human nature to categorize and homogenize. One of the play's most important messages is that there is no single trans narrative. Trans women have rich, essential, personal stories uniquely their own. During the talkback Vita Cleveland, in response to a question asking what the commonalities were among trans women, answered "Death and oppression." Bam. 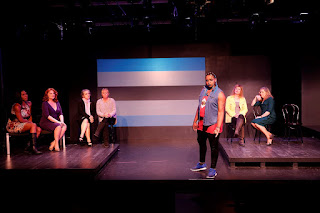 Another audience member took the opportunity to commend the women, their bravery and remind them that they were beautiful. And to say essentially (and I'm paraphrasing) that she just wants people to get along. Something along the lines of "if you are nice to me and care about me and my family, I'm happy to care about you and the people you love." One of my favorite moments of the entire evening came in Cleveland's response . . . "THEN CARE OUT LOUD!"

It really isn't enough to forward a meme or two on Facebook showing your support. We need to care when it isn't convenient; when it might even cost us something. Care in the ballot box. Care when you see a trans sister being bullied or worse. Inaction in the moment, but condemning it later over social media is not caring.

Trans Scripts was presented with the support of Diversity Richmond with proceeds benefitting Nationz Foundation, a non-profit providing "education and information related to HIV prevention and overall health and wellness. Nationz Foundatin "inspires the community to take responsibility for their health; and works towards a more inclusive Central Virginia for LGBTQIA+ identified individuals."