"We're not going to have the America that we want until we elect leaders who are going to tell the truth - not most days, but every day." - Ann Richards
There's nothing "usual" about politics these days nor live theatre in the time of COVID. But there is some hope - for both - and it can be found at Firehouse Theatre in Holland Taylor's gem of a play, Ann.
The larger-than-life former Governor of Texas is channeled by Jaqueline Jones who transforms into Governor Richards before our eyes. Jones' trademark sense of humor and exceptional acting talent are on full display as she gives the audience a glimpse into the life of the boisterous, opinionated, and feminist advocate for the people.

Photo by Bill Sigafoos
Ann Richards first came to national attention at the 1988 Democratic Convention and soon was well-known and beloved for her no-nonsense, truth-telling advocacy of the marginalized.  Ann takes the audience through Richards' unusual path from the local PTA, a failed marriage, and an alcohol problem, to her one-term governorship. A role which demonstrated to women from all walks of life and political viewpoints that there IS a place for women and it IS in higher office.
In addition to Jones' truly rich performance, kudos go out to the top notch production team. Billy Christopher Maupin's direction was seamless, and Todd Labelle's lighting was spot on (pun intended). Granted, she had a load of talent to work with, but Erica Hughes' did a phenomenal job as dialect coach. I watched the 1988 Democratic Convention, and I could sit back, close my eyes and believe I was hearing Governor Richards' voice.
I enjoyed every minute of Ann.
No, there isn't anything usual about politics or theatre these days, but art prevails and feeds our souls even during the worst of times. And Firehouse Theatre (and the entire production team and actors committed to a safe and meaningful experience) makes this possible with contactless performances limited to 2, 4, 6 or 8 (who do we appreciate? Firehouse!) audience members. And select performances are live-streamed (see below for the remaining performance schedule and ticketing information).
Firehouse Theatre's synopsis of Ann notes "one of Richards' most passionate beliefs was that democracy depended on everyone voting and actively participating in manifesting the ideals of equality and justice for all."
Go Vote. Our lives and livelihoods hang in the balance.
Performance Schedule:
Fri, Oct 16  @ 7:30pm (capacity of 8)
*Sat, Oct 17 @ 7:30pm (capacity of 8)
Sun, Oct 18 @ 4pm (capacity of 8)
Fri, Oct 23  @ 7:30pm (capacity of 8)
Sat, Oct 24 @ 7:30pm (capacity of 8)
*Sun, Oct 25 @ 4pm (capacity of 8) *live-streamed performances (capacities are for the performances at Firehouse, not the stream)
Tickets are available for the live performances at  https://www.signupgenius.com/go/9040c44a5a828a7ff2-ann for a suggested donation of $30 or pay what you will.
And to sign up for one of the two live streamed performance go to
https://forms.gle/dnmhhqXGcjXvs1BLA
at October 12, 2020 No comments: 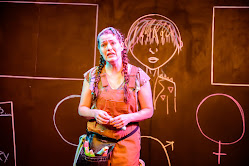