The October 7, 2019 issue of People magazine arrived in my mailbox yesterday. I've somehow accidentally subscribed to a magazine I never read. Most issues have gone straight to a pile on my bookcase. Who knows, maybe I'll need magazines for a collage or something? But this latest issue caught my eye: A photograph of Felicity Huffman with the caption "Facing Her Fate." Huffman is facing prison time for her role in a college admissions scandal - cheating to get her own children into elite schools.

TheatreLAB opens its 2019-2020 Season - Power and Privilege - with Admissions, which may as well be the Huffman scandal but set at Hillcrest, an elite co-ed college prep school.

Joshua Harmon's award-winning play is a scathing critique of power, privilege, and hypocrisy where passionately held views collide with personal experience. In the hands of Director DeeJay Gray and a stellar cast of some of Richmond's most talented actors, the show comes alive and the audience is left questioning their values, beliefs, and behaviors.  I left the show feeling uncomfortable. Am I a racist?

Sherri Rosen-Mason (Donna Marie Miller) is the admissions director who has made it her life's mission to make Hillcrest's milky white student population more diverse.  When their diversity numbers hit eighteen percent, she celebrates with her husband, Bill (David Clarke), the progressive headmaster and English teacher at the Academy. They drink champagne, and stroke their egos for all the good and heartfelt work they've done.

But when their son, Charlie (Tyler Stevens) is wait-listed at Yale, and his good friend Perry - who happens to be biracial - gets in, their hypocrisy is exposed. Charlie goes on a verbal rant that is spoiled, white privilege personified.  Stevens' self-pitying, spoiled-rich-boy monologue is one of the standout moments of the show.

Charlie and Perry are friends. But Charlie knows he's the superior student.  So there must be another reason that Perry got in and he didn't. Another standout moment happens when Ginny (Sara Collazo), Perry's mom, confronts her good friend, Sherri, and calls her out on her white privilege. Ginny demands Sherri acknowledge that whether she likes it or not, she does believe that Perry got the spot at Yale . . . because he's black. 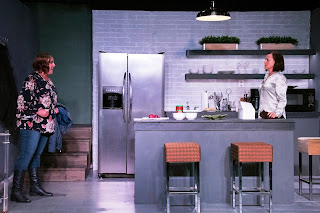 Providing comic relief is comedienne extraordinaire, Jackie Jones as Roberta, an older administrator at Hillcrest who is charged with compiling pictures for the school catalogue. When Sherri informs Roberta  the catalogue doesn't reflect their student population, and that she needs to get more representative photographs,  Roberta awkwardly navigates the new lingo of political correctness. We squirm as Roberta tries to get clarity on what her boss wants. Roberta states that she doesn't see color - a phrase about as cringe-worthy as 'I'm not racist, I have black friends.' Trying to understand her boss's concerns, she further puts her foot in her mouth, asking clarifying questions such as "do you mean darker ?" 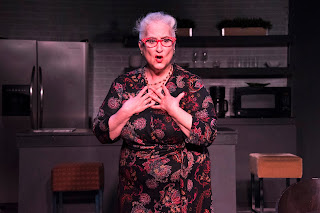 I am not color blind. I do see color. And sometimes that makes me an unintentional racist. I truly believe my heart and convictions are in the right place. But as a woman who grew up in an upper middle class mostly white neighborhood I've internalized some racist tendencies. I'm not proud of it, and I work hard to overcome those tendencies. I'm reminded of the song from Avenue Q: Everyone's a Little Bit Racist.

From costumes and set to extraordinary performances by Donna Marie Miller, David Clark, Tyler Stevens, Sara Collazo, and Jaqueline Jones, Admissions knocks it out of the park.  If this production is any indication, we're in for one hell of a season at TheatreLAB. Be prepared to squirm and have to face your own power and privilege in the mirror.
at September 28, 2019